All images are © 2014 Dark Horse Books / Frank Miller, All opinions are my own.

If you saw my massive one book haul post, you know that this is a mammoth book @ over 1300 pages, full of semi-black and white comic-mischief and mayhem tailored in by Mr. Frank Miller and his crew being Lynn Varley on color art and logo by Steve Miller, published by Dark Horse Comics.

In this review I will assume we know nothing! Having viewed and picked the marvelous movie and it’s cinematographic heights and splendorous display as one of my most favored films of all time, I will still treat this as if I know absolutely nothing about it, only revealing things and thoughts as they are revealed in the book.

At the end of each post, I will make a character round-up and summarize what we know about each character as the story progresses, along with my thoughts.

WARNING: This book most certainly is NSFW and only for adults. I will do my best to leave the vulgarities out of it so that everyone can enjoy. Although, if you can stomach the madness, to achieve the full effect, a proper purchase of the source materials is recommended.

After a copulation session while internally bashing his logical and physical surroundings, this male ruffian ( name unknown ) wakes up to find his mate unconscious.

We learn the female’s name is Goldie.

Death on first date. He thinks death immediately, but there are no signs of trauma or struggle. The male ruffian knows it’s murder by a gut feeling fueled by his hangover. Maybe it was cardiac arrest? He speculates cold murder, for sure. He’s questioning things, thinking about how he didn’t care when he was asleep. He hears a distant scream moving toward.

The murderer must have told on him, he thinks. Scuffles with the cops have happened before. It won’t go well this time, at all. But that’s no reason not to raise some Caine!

Someone’s gonna pay for bringing death again so close, he thinks, especially after a night with a lucky score like Goldie.

Here comes the coppers, sirens blaring up the stairs with guns and tactical equipment of an unknown variety!!

While waiting on the cops, the ruffian pops some pills of questionable origin and then busts through the door as soon as the cops knock, instead knocking them to the floor! He runs into the hallway and jumps out the balcony, dodging a bullet in the process. Unaffected, he gets up unscathed and jumps out of the window, into the outside air.

Falling a long distance down, outside of what looks to be an apartment complex and onto the street, the male ruffian is confronted with the cops again and pulls the outlandish move of jumping into the cops’ windshield feet first, takin’ em out and thus wrecking the cop car into the apartment’s brick wall.

Why did Goldie have to die like this? He’s determined to give someone a slow, hard death for murdering Goldie even though they just met.

Man, these are the exact kinds of situations ya don’t want to be apart of. This guy, the ruffian is stone cold to the core, knocking the cops out on more than one occasion in these first two bits.

And, second of all, I would absolutely flip if I woke up and the person next to me was dead. A even nightmare. This guy just pops some pills and takes out the cops. But, there is an indication that he knows this situation for some reason. I hope we’ll find out.

Is he a drug addict? Where did this girl come from? Is she in on this framing? Is it a framing at all? So many questions!

There’s an indication that death has been following him for some time, that murder surrounding him has happened before. Did he do it in his sleep? Is she really dead? There’s no evidence of either question, just raged thoughts coming from a pill popper. I mean, not even a pulse check for the poor woman? Come on, ruffian man! Are you so drug fueled that your gut feeling tells you everything you need to know? Use your resources, man. I’d really hate to be in a situation like this, but hot damn! Guessing by the dialog, this guy is in some deep caca and has been for some time possibly some sort of local waging.

This surely is a story to take your time with. I’m intrigued. It’s not glamorous, pretty or favorable. It looks hellish and dangerous.

See you next time,

Guys and gals, until next time – may you find all the happiness that your life can fit in it’s happy spot – S.D. McKinley.

S.D. McKinley lives in the suburbs of Atlanta, Georgia. He was born in the first half of the 1980's and grew up in Wisconsin as a young boy, then moved to Georgia when he turned exactly twelve years old. During teenage years, he raced dirt track go karts and played guitar. He discovered his current love for all kinds of art after his mid-life crisis at 25 years old. S.D. McKinley began writing books in 2017.

I’ve seen the movie a couple of times, it’s so cool.

I’m glad you think so, fraggle. We need more movies with aesthetics in 2021. Movies should look like movies, not reality! Can I get a heck yes? 😀 Do I look funny with my hat off?

I would say “glad you are enjoying this book” but since you invested the money, time and space for it already, that seems a given.

One question I had. You give Darkhorse as the rights holder for any images. Now, do you “need” to do that, as it seems Fair Use would cover that, or are you doing it just to be safe? Or some other totally unknown (to me) reason?

Yep, that is a given, you guessed correctly. /Throws a cigar

So, not really playing it safe just as a more of a clear indication of the complete origin of the book. While I didn’t see a particular copyright ( I’m going to look again to be sure ) statement on the inside first pages like you normally see with print books and also a “credit where credit is due” type of thing. I’m sure if I made something like this mixed feelings would run through me about someone taking pictures of the work and posting them. I’d probably have a couple thoughts like “If you want to view the art, buy the book”, ha ha. So I try to be mindful of stuff like that. Even though Im basically doing a sort of free advertising, this sort of thing would only come from my side of the house on something I’m trying to get to the bottom of story wise. 😀

I’m going to ask you what I asked fraggle, do I look funny with my hat off, ha ha. 🤠

I’m lost, what hat are we talking about here?
(and I’m pretty sure it is “ruffian”)

Thank you for that correction. I’ll get it straight ASAP. 😎👍

I’m assuming your joking or I don’t get the reference.

Is it possible that Rorschach was reincarnated into Pratchett? 💂

Rorschach, from Watchmen? That is who I was referencing…

Ah! I was checking out inkblots about a late Swiss psychologist. That’s making more sense now. 😂 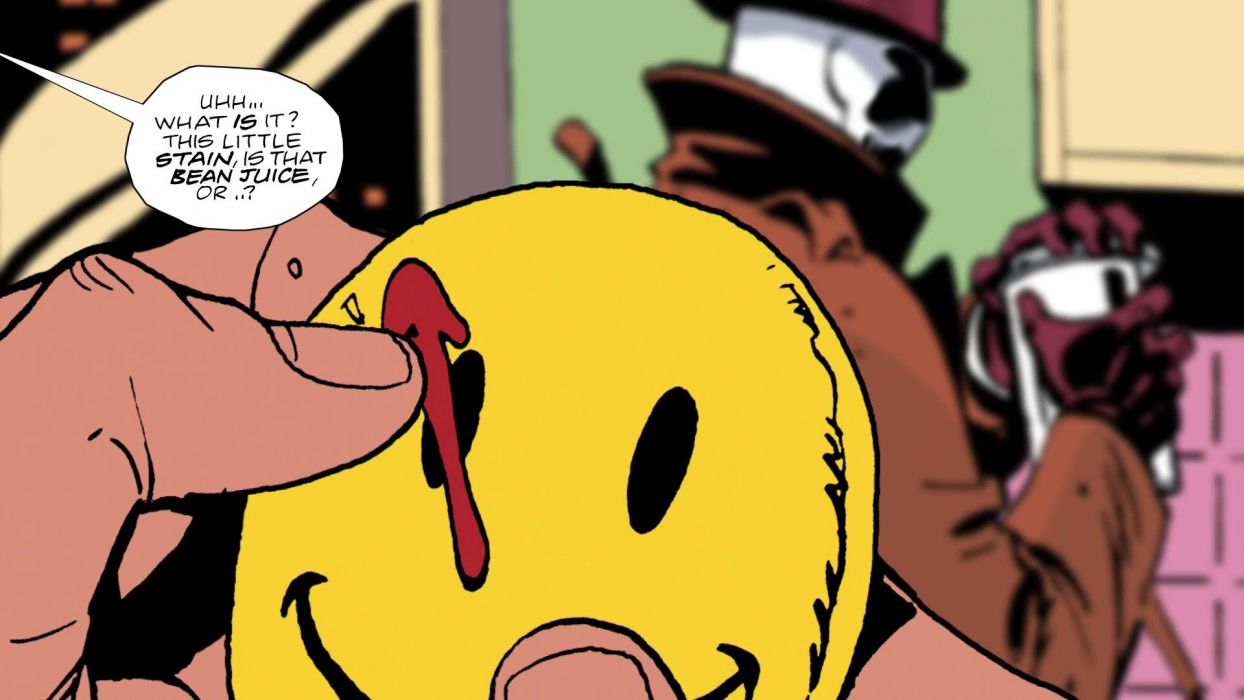 Great read. I cant wait for the next instalment now. Frank Miller is the best!!! I like how you tell the tale, loved it.

[…] we covered Part 1 and 2 of The Hard Goodbye. Now, we have a continuation with Part 3. Life has handed me the brass knuckles and I’ve been […]

Follow S.D. McKinley - thoughts from an indie author on WordPress.com